Blood Money is the true legal thriller of a terrifying David vs. Goliath fight against massive healthcare fraud brought by a brave Whistleblower, at tremendous personal sacrifice and cost over many years.

Chris Riedel never saw himself as a crusader. He lived the Silicon Valley dream, founding his first company at 24, then starting two others while he was still a young man. The first two companies revolutionized how bacterial infections were diagnosed and treated — saving hundreds of thousands of lives around the world. He retired early to enjoy raising his young sons with his wife Marcia.

Aware of the diminishing number of medical labs in Northern California, Marcia encouraged them to return to the business and they started Meris Laboratories — and that’s where the trouble began! In the decade since they left the business, two major behemoths, Quest and LabCorp, had assumed dominance in the industry, euphemistically referred to as the “Blood Brothers.”

After investing millions into the development of Meris, it became apparent that the “Blood Brothers” pursued predatory business practices that drove their competitors out of business, and at the same time illegally billed millions to Medicaid, while providing kickbacks to doctors and medical practices. Chris had a Sophie’s choice — join them and break the law, or fight them to stop the practice, level the playing field for other labs, and get back some of those millions for the taxpayers. 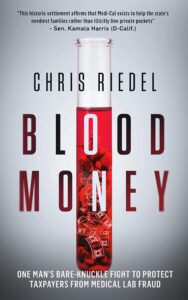 He chose the latter, filing what is called a Qui-tam, or Whistleblower lawsuit (also called the Lincoln Law, because that President signed it into law to prevent massive fraud by U.S. Army contractors during the Civil War). With a Qui-tam suit, the plaintiff sues on behalf of the taxpayer, and if the suit is won, is rewarded with up to 30% of the recovered monies and damages — to be shared, of course, with the attorneys. Nevertheless, it’s a major legal gamble because many of these cases go nowhere after huge time and money investment. But staying with them can ultimately catch and punish the lawbreakers — while restoring millions or even billions to the public till. And so, Chris stood up for justice!

But that’s where things get really interesting…Chris relates accounts of attempted murder, extortion, money-laundering, hidden money in the Caymen Islands, gold buried in a storage container in a CEO’s backyard, an assistant attorney general sabotaging her state’s case and a corrupt governor torpedoing litigation by his own attorney general.

Never realizing the headaches, heartaches, and the financially and emotionally crushing retaliatory actions that the” Blood Brothers” had in store, Chris refused to give in, even as the cases (they sued in several states beside CA) dragged on — to the point that Meris Labs could no longer sustain itself and the family savings was gone. And finally, while he and Marcia were on the edge of financial Armageddon, a landmark settlement for millions saved the day, and forced the end to those specific illegal practices. At the time, then California Attorney General Kamala Harris said: “This historic settlement affirms that Medi-Cal exists to help the state’s neediest families rather than illicitly line private pockets.”

With Meris Labs closed and his family now restored to financial sustainability, Chris traded his CEO role to focus more time as a Fraud Fighter. In addition to pursuing the lawsuits to their end in the other states, he has become a guide, consultant and supporting partner for other Whistleblowers who decide to file Qui-tam lawsuits to right the wrongs that cost taxpayers billions. One thing that is clear in Blood Money, One Man’s Bare-Knuckle Fight to Protect Taxpayers from Medical Lab Fraud, medical laboratory fraud is enormously widespread by ostensibly reputable companies throughout North America, and Chris could be kept busy the rest of his life fighting this pervasive taxpayer theft. His actions have already resulted in more than $550 million in settlements and a court verdict…and counting.