The Plant Food Diet Miracle: A Lifesaving Primer for You and Your Loved Ones 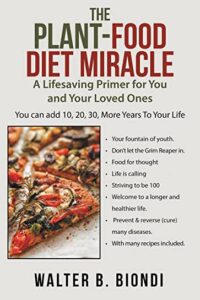 Hippocrates was the so-called Greek father of medicine who lived over 2,400 years ago. He once wrote, “Before you heal someone, ask him if he is willing to give up the things that made him sick.” Recent medical discoveries prove Hippocrates was correct. Modern day medicine has unquestionably shown that dozens of medical conditions and diseases are caused by, and can be cured by, what we eat.

The Plant Food Diet Miracle is an informative, pragmatic book that shares the importance of eating plant-based foods. Diets based on plants have repeatedly improved people’s health. It’s that simple. This educational book is also packed with delicious, nutritious recipes celebrating plant foods.

If you would like to live-in much better health-an additional ten, twenty, or even thirty years longer, then this book will expedite you on your quest. It’s time to take business away from the medical and pharmaceutical industries and heal yourself with the help of revelations that are life changing, if you dare to read what many don’t want you to know.

The Plant Food Diet Miracle: A Lifesaving Primer for You and Your Loved Ones Kindle Edition

About Walter B Biondi

Walter B. Biondi is the award winning and best selling author of Jeremiah’s Tale and The Promiscuous Puppeteer. His newest book, The Plant Food Diet Miracle will serve as a “Fountain Of Youth” for those who have been hoping to find one. Walt provides information that government health officials, politicians, and certain industry leaders do not want people to know. Once known it can add 10, 20, even 30 more additional happier and healthier years to the average person’s life. The science and outcomes are unequivocal. Whole Foods, Plant Foods, and a Vegan lifestyle are a significant part of that equation. Read all about it in his new 330 page book which includes many mouth watering recipes; and remember, “don’t let the Grim Reaper in.”.
Other Best Selling  Books By him.

The Promiscuous Puppeteer is a multifaceted story about a secret gold exploration company funded by a syndicate comprised of some of the largest mining companies in North America and a CEO who is approached by a Mexican Native American woman, whose skills, from a sordid and seedy past, have the potential to help launch the world’s largest gold discovery onto the international stage.

Chinese intelligence and embassy officials, US politicians, unscrupulous industry leaders, and a fledgling but growing and menacing Native American mafia are all primary constituents of a compelling and momentous drama that takes place throughout the western third of the United States. It all begins in a five-thousand-foot-high remote desert location called Tonopah, Nevada.

In an unusual decision, the publisher included an uncharacteristically lengthy “About The Author” section in the final pages of the book. In brief, it was written “…the incredible and previously unknown story… about the author, Walter Biondi,…who after hitting absolute rock bottom…rose to became a storied and unbelievable success…” in public and private life. The author said, “My personal and previously private background may be of some help to those in need of hope and inspiration. For the first time, readers, viewers, and listeners will learn something new about me. It was something I tried to forget, and was always loathe to resurrect, until now.
I have been asked to consider writing a sequel to my new book and/or an autobiography about living a young life in absolute hell and then fighting my way up to the top.” Which one should it be?”

Popularity Views : 102 Traveling Asia is something that everybody ought to experience at least as soon as in their life time. When you travel to Asia, there are so many points to see and do; make sure that you plan your journey ahead of time. Nevertheless, bear in mind to leave some downtime in