Studio CarryOnHarry : Interview Music Artists A.Swain & Lipe, who are a duo production team also know for singing and songwriting . Met in 2011 and have worked with Variety of artists in many genres from hip hop , Rnb,Pop to even Country ! They teamed up to for Produced byNWP in 2015 and released their first EP A thousand Likes all of their music distributed thru the Orchard Of Sony Music!

They most recently expanded their long partnership with The Orchard which pairs with their label Nettwork Entertainment Records . Both men take on CEO roles as well as putting forth great music !

My Rules music video hit the market in a major fashion reaching over 1.3 million views over 3 years time and is growing daily . Just a great musical vibe which is needed in times like this !

A.Swain & Lipe are a producer duo who came together about 9 years ago to form Produced by NWP. We are from the state of Missouri and now reside in Los Angeles . Our goal is just to put fresh new music into the universe that people can really enjoy be inspired and uplifted ! 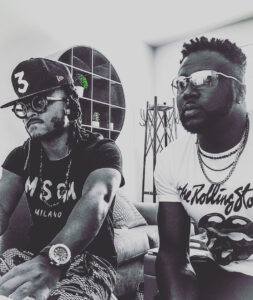 We both took on music at young ages and have over 20 years of music experience between us . I’d say since junior high but really took it seriously outside of high school.

Just the whole process of learning new nuisances of music being able to create a new sound and be innovative, we just have a pure love for music . HUGE music fans first musicians second!

In this industry working with different personalities can be a challenge and a test ! Growth comes from learning how to handle those situations, learning how not to go off on the deep end when your ego or your character is challenged . As you get older you just understand that everything doesn’t require a reaction … We not for everybody and you have to learn to be ok with that !

Combined we have a few people that inspired us , definitely have to say Jimmy Jam & Terry Lewis ! Also mega stars like Pharrell Williams , Baby face ,& Stevie Wonder! We have worked on mixing a lot of those different eras /Genres and bringing into the now to create this new flow as we like to call it ! We are the kings of the New Flow !

Positive energy flow, we believe everything is a flow , so we want to continue to be that new wave and let people know thru there is no dream too big & always THINK BIG !

When we get in the lab there’s a flow and we just let whatever comes out of that vibe happen on its own ! That’s how My Rules came about …we created it all in one session from the music to writing the actual record & recording it! Few hours later we need it was that ONE ! We both add our different flavors to each track Lipe is heavily polished on the keys dated back from growing up playing in the church , Swain as well which makes it easier we don’t have to use a lot of samples ! They are too hard to get cleared and extremely expensive! We like to write and create from scratch with the artist as producers probably the most fun for us !

We want to thank C.Llea who is featured on the song for bringing her flow like only she does ! Also the millions of viewers who’ve watched the video and the thousands who’ve streamed My Rules, we wouldn’t be where we are without you! Thank you thank you !

It would be a dream come true to work with Jay -Z Or Kanye ! Just to be able to rub elbows with two of the biggest musical geniuses in our industry! Second part of that question id say Diddy, we also have our own record label we believe in breaking the next big artist in with our label Nettwork Entertainment Records the same way he did with Biggy and so many others ! We want to follow that same mold !

I see us being house hold names , being go to producers for a lot of the biggest artists in our industry!

We already work in all the different genres of music . Our production catalog has Hip hop , r&b , pop , country/folk so we will continue to expand into future projects , making it to where there’s nobody we can’t work with !

We again want to thank each of our fans and listeners for rocking with us . Keep rocking with us ! Sounds so good don’t you AGREE?! We love y’all & we just getting started ! Let’s go !