Studio CarryOnHarry  in talks with book author Len-Handeland-author of new book The Darkest Gift who is about to introduce his new book to us. He shares his journey as an author and at same time explains us his writing process and things that went around building his plot and characters. He also shared some tips for new authors as well. I have always enjoyed writing and drawn to being creative—as far back as I can remember. Back in middle school, when me and my classmates were assigned a book report, and the others groaned, I cheered—not only being given an exciting novel to read but also to compose the essay assignment as well.  Everything had to be perfect, the spelling, grammar, and accuracy regarding the subject matter. Later on—in my late teens, I attended FIT in Manhattan studying fashion illustration; years later, I decided to pursue a career in the hair industry using my artistic training and creativity to excel in hair, I am now retired from hair and have focused on being a full-time author.

I decided to pursue writing after reading many of Anne Rice’s work (having read all of her Vampire chronicle books) and after attending the San Francisco International writers’ conference—decided it was time for me to write a Vampire story of my own; in my words, given my affinity for horror and this particular genre.

A different story—where love is the only thing that matters, whether between two men, two vampires, or a vampire and a human being.  When I’m not writing, I enjoy reading and enjoy vegetarian cooking. Some of my other hobbies include hiking, biking, and billiards. I enjoy the performing arts and have trained in Martial Arts for over 25 years. I live in Palm Springs with my husband, Byron, and our two tuxedo cats, Felix & Felicia (who are siblings)

Just as there are elements in a person’s character for acting, there are in writing as well. Some, clearly not all (as my book is based on fiction) are from some of my life experiences. When writing a book based on fiction, creativity and a wonderful imagination are extremely beneficial. 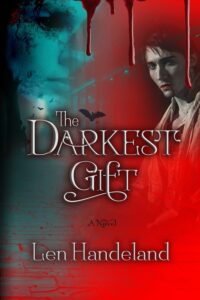 My book’s central theme is a tale of love, jealousy, rage, and the Supernatural!

When I was growing up, I was always drawn to vampires. Watching classic shows like “Dark Shadows” and the 175 year old vampire “Barnabas Collins” portrayed on the show. In later years I read all of Anne Rice’s vampire books (“the vampire chronicles”) and was obsessed with a show on HBO called “True Blood” all of these shows and characters made an impression on me and helped to inspire me to create my own story and characters.

I would say there is a little of me in every character. Having performed on stage in community theater, it’s easy for me to bring out elements of myself in whatever role I performed, I apply the same to my writing.

I wouldn’t say that it is difficult to write about the goodness or evil intentions. I think we as human beings possess both (call it “Yin and Yang”). We suppress the evil or sinister purposes (or at least most of us do) and focus on finding goodness so that love and light always prevail over darkness and evil.

During the writing of my first book, I didn’t do an outline of the story; call it “on-the-job training” we grow and learn as writers. Through the help of an editor, we were able to stitch some of the chapters together, and what didn’t work was either edited or deleted entirely. For my next book, I have already started the outline, which will give the story more consistency and more of a flow as it relates to the story.

I’ve only written one book so far, “The Darkest Gift” however, as I mentioned before, I’ve started the outline of my next book, entitled “Requiem for Miriam.” My first book was a vampire paranormal romance novel. My second book is leaning towards becoming a murder, mystery, crime, drama book with a hint of paranormal activity (ghost) for added intrigue.

My favorite character in my book is Fabien. Despite being a vampire, he tries to do the right thing by not using humans as an endless food supply. Instead, he focuses on criminals, murderers, which society would consider genuinely evil. Thereby he justifies his existence and has very little guilt feasting on these unsavory characters called criminals. He’s steadfast in his convictions, is extremely loyal to his love Laurent, and is clever, at times vulnerable, and displays a tremendous amount of courage and strength at times. Yes, he would be pretty interesting to meet in real life, someone you could comfortably be around despite him being a vampire.

I would recommend this book to readers because I felt no other author had written an enthralling vampire romance novel since Anne Rice, which was a breakthrough in featuring two vampires of the same gender as a couple. I wanted to write a compelling and enthralling book where the characters are complicated (both humans and vampires).

My same-sex couples are far less ambiguous about their sexual orientation than in vampire books of the last century. Where the emphasis is on love, whether human and vampire or two vampires (of the same gender), it was vital for me to avoid anything graphically sexual, but instead, the focus is on the sensual aspect of two men together. Also noteworthy was addressing stereotypes regarding vampires and some of the gay men in my book. That all vampires are evil and unfeeling creatures, that all gay men are effeminate, couldn’t be further from the truth.

I utilized the classic tale of good versus evil (in this case, vampire against vampire) and how one of the human characters, Jack, despite his struggles with sexual orientation, finally learns to accept and embrace who he truly is. The message I’m trying to deliver is: do what is right and be true to yourself. In my novel, that applies not only to humans but vampires alike. I think my readers would appreciate this, and hopefully, they’ll pick up on the message I’m attempting to deliver and be inspired to be as courageous as some of my characters in my book.

I recently started the outline for my next book; let’s just say, my second book will have as many twists and unexpected turns as my first book with a surprise ending!

Yes, give some structure to your book and don’t “gloss over” your characters. Your readers deserve to know their background, history, make your characters interesting, relatable, and give them depth. That, and add something entirely unexpected which will keep your readers engaged with your book.

I heard about “CarryOnHarry” on Facebook and I was intrigued. So far, everything seems insync to me.