Studio Carry On Harry  15 June 21 :  An interview to meet and know a passionate music artist and band leader  Cass Clayton . The  Occasion was perfect as her new song ” City Noise ” has been released , studio had a session of Q & A with Cass to know about her musical passion as well as story behind making of her new song and her journey ever since limelight kissed her.

Talking about Cass Clayton Band emanates an enthusiasm as well as power that has made them a favorite in festivals and venues across  North America. Cass has made her means into the hearts of music lovers almost everywhere with her expressive lyrics, smoky-smooth voice as well as a belting vocal array that will knock you flat. She’s additionally known for some soulful slide guitar having fun. Cass Clayton Band blends impacts of rock, funk, heart, scripture and blues in a new way with plenty of innovative sounds and unforeseen spins.

About her new song

“City Noise” is one of those songs that has a lot of layers to it, because the “city” is really “humanity.” When the city suffers, the collective suffers. – Cass Clayton 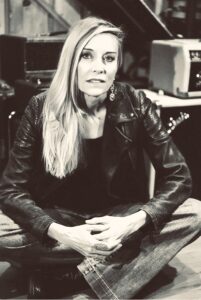 I’m Cass Clayton of the Cass Clayton Band (based out of Denver, CO). We’re so excited to be setting up tours again and to be sharing all of the new music that came out of the silence. It was a hard year for all musicians, but it forced us to thrive creatively and stretch our sound in new directions. We’ve been really experimental in the studio.

I’ve been in performing arts for 7 years. Initially I was in a band that covered soul and blues music. But I quickly realized I had to write my own music, and explore a more genre-bending approach. I was really fortunate early on to meet a great co-writer and composer, Taylor Scott, and we’re almost finished with our third album together.

I love following the songwriting process to its natural, and always surprising, conclusion. You reach your hand into the dark and pull something in that’s from your subconscious. You don’t really know what it has to say to you, and if you try to bully a song into a certain direction, it will continue to hide until you finally let go. It’s a beautiful and sometimes frustrating process.

My biggest growth experience has definitely been about forcing myself to work with new people, even though it feels safer to make music with the people I’ve known for a long time. Bringing a new person into the room can re-energize everything and I love seeing through the lens of a different artist. But it’s also scary sometimes. It’s easier to stay with what and who you know, but I always find a way to break out of my little shell and trust that there’s something new and exciting to learn.

My early inspirations were blues musicians like Hubert Sumlin, Blind Willie Johnson, Elmore James, and Koko Taylor. That all came from my dad’s love of blues music. But I was also obsessed with the Allman Brothers, Eric Clapton, and a lot of rock music with those old-school influences. I’ve also always listened to singer-songwriters like Joni Mitchell, because there’s nothing more exciting to me than a story well told in a song. My own voice is a continually evolving thing. I don’t think I worked on creating it. I like to allow the songs to come in the way they want to, and co-writing with Taylor Scott contributes to that voice as well through all of his influences and skill as a composer.

That’s a really great question and one that’s not easy to answer. For me, every song has it’s own a message and a vibration. Each song carries a frequency through the lyrics and instrumentation, which is a signature that will never again repeat itself in the universe. So it’s a grand experiment. If a song allows someone to feel joy or process something sad, maybe that frequency was for them. I always intend for all of our music to give each person exactly what they need in that moment. If 100 people look at a painting they’ll all translate it through their own lens, and songs can be like that too.

I started writing “City Noise” late at night after going to a friend’s show downtown. This was during the midst of the shut down and the city was completely empty, so it was eerie. Normally there would be a room full of people outside talking after a great concert, and I had to write about how much I was yearning to hear some city noise.

Well, I think “City Noise” is one of those songs that has a lot of layers to it, because the “city” is really “humanity.” When the city suffers, the collective suffers. I could go on and on about this, because it’s a deep subject, but basically we wanted to find a way to express the intensity of the mood when the city was empty. One of the ways we did that was by choosing to have two bass players on the song (upright and electric), which makes it super moody.

I have a long list! Taylor Scott, co-writer and producer and Geoff Gray, owner of Far & Away Studios, Alex Stricker, sound engineer. All of the musicians who worked on this in the studio blew my mind: Jon Wirtz (keys), Brian Claxton (drums), Chris Harris (bass), Patrick McDevitt (upright bass). My family for putting up with my absence!

You can put Warren Haynes at the top of the list in both categories. There are countless musicians I admire, but the ones I want to work with most have heavy blues, rock and soul influences and are innovative at the same time.

Now that the world is opening up again, I see us touring more and playing around the country and possibly internationally depending on the state of the world. I just want to be sharing the music and the joy as much as possible.

I would like to do some writing and collaborate with more artists who inspire me. Since we’ve always been pretty non-denominational in terms of genre, I want to continue to explore that. For me, it’s about keep things fresh and contemporary and being open to learning new things and adding new sounds to the music. I like it when I feel like a little kid going down a slide really fast.

We are so grateful for all of the support during what was a pretty crazy year for humanity and a slightly terrifying one for full-time musicians. I hope you’ll always come by and talk to me after the show. Those connections keep me going and make playing so much fun.