Studio Carry On Harry [ Interviews with Authors ] Book Talks with Author Sandy Hanna . Occasion being her New Book Release “’The Ignorance of Bliss: An American Kid in Saigon‘”  . Today in this interview session she is about to introduce her  book to us  and shares her experience as an author. She is also going to share her writing process and will share some tips for new authors .

Title New Release Book : The Ignorance of Bliss: An American Kid in Saigon

I am a BRAT (a British Regiment Attached Transfer), a military dependent who has traveled the world with my transient family beginning the day I was born. I am also part of a small group of kids who grew up in Vietnam in the early 60s. I am a writer, a designer, and an artist, with a diverse professional background from designing adventure playgrounds for HUD to a theme park for Children’s Television Workshop (Sesame Place). My education is equally diverse from an undergraduate degree in ‘interdisciplinary programs in science and literature’ to a masters degree in education in the ‘biology of cognition.’

What is the background story of your book ? 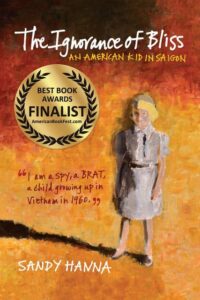 When my father, the Colonel, was in his eighties, he slid an aged folder across the table to me and told me it was time. When I asked him what it was time for he replied: “If you don’t understand history, you are destined to repeat it. We are doing it again in the Middle East.” The folder contained an expose written by his Vietnamese counterpart exposing the corruption and mistakes the United States was making in its understanding of Vietnam.

When I asked him if he wanted an accurate documentary, he said he would prefer a compelling story because Americans didn’t like to talk about Vietnam. So, under orders of the Colonel, I wrote a memoir about growing up in a country unraveling. As children, we lived in the continuous present, perhaps the only way we children could live then.

What approach have you followed to narrate the story ?

With most people shying away from discussing or understanding the story of Vietnam, I knew I had to take an approach that wouldn’t put the reader off. Harper Lee’s ‘To Kill a Mockingbird’ told a story through the eyes of children to expose the prejudice of a small southern town effectively.

I used this approach to tell my story about Vietnam, telling it through my young eyes. Combining this approach with Conroy’s ‘The Great Santini,’ a story that exposes the inner workings of a military family, I felt I had the perfect approach to what I wanted to accomplish.

The United States involvement in Vietnam was based on misinformation and total lack of understanding of a country and culture. In order to include the historical facts necessary to support the real life story I was telling, I put ‘A Moment in History’ at the end of chapters that would educate the reader of what went before or what went after specific events.

When you say real story it may need lot of things to expose ? Did you really dare to bare ? 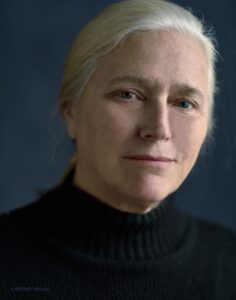 It is only through understanding history, that we will have a chance at not repeating it. Most people have no idea of the lies that were perpetrate to involve the United States in a full scale conflicts. Like the lie of ‘weapons of mass destruction’ told by President Bush to involve us in the Middle East, the Tonkin Bay Attack was used to justify United States involvement by President Johnson in Vietnam, a fact that has now been released from the Library of Congress.

In ‘The Ignorance of Bliss: An American Kid in Saigon’ the reader will understand Vietnam in a completely different way than has been portrayed before.

Do you structure the flow of story before writing or was it a sort of memoire ?

I used the structure usually used when writing a screenplay, breaking it down into three separate parts: Part 1 has an event that grabs you and sets the stage; Part 2 is fun and games (building up of backgrounds and events); and Part 3 comes full circle to the initial event. The story is a memoir tucked into this structure so that the reader easily moves through the story.

As an author what was objective of writing the book ? Normally people would like to forget bad things and move on ?

My objective in writing my memoir was to give the reader a look at an amazing country, culture, and its history. I hoped I could provide a different perspective, told through the experience of a young girl growing up in Vietnam from 1960 to 1962. By revealing the forces that were at play in this small country in the middle of a civil war, the role the WWII Allies took in supporting the French, and the ultimate betrayal by the United States and the Diem regime of the Geneva Convention, the final results of this war might better be understood. I also wanted to expose the reader to the lives of the children that follow their military families into these battlegrounds and the military culture that surrounds them growing up.

How do you see the incidents behind your life ? Turning Point / Becoming What You are today ?

On the day in 1960 when my brothers, sister, and I snuck out from the villa undetected, to go to what we thought was a parade, life changed significantly for me. It turned out to be a coup and four hundred people near us were shot. I now paid attention to everything around me and would continue to do this for the rest of my life. I am the product of a military upbringing and as such am a nomad, a transient gypsy, moving every two years out of habit, able to leave without concern about leaving friends, pets, teachers, and homes.

I have no attachment to possessions and can leave everything easily. It is a struggle to stay somewhere, to see a relationship as long term, to allow oneself to be vulnerable to anyone or anything. Yes, I am the product of my entire life experiences. BRATs are a subculture that few understand, but most people have known one of us in their lifetime. I wouldn’t change one minute of my life. I have been exposed to the world, its similarities and differences, am amazingly adaptive, and embrace change.

Any thing that changed within you ? Do you see it as positive change ?

The change that took place for me was that my childhood view of the world was altered. I no longer had the innocence that children have. I returned to the United States as a little adult, serious, somewhat pessimistic, and in awe of the innocence of civilian children. I felt like I was an alien stepping off the surface of the moon for most of my childhood. Was it a positive change, probably not in the short-term, but for the long-term, yes. The positive to it all was that I became the person I am today as a result of theses experience in my life.

Readers have told me they loved this book and had a difficult time putting it down. They found the story to be both fascinating and amazing. Additionally, they have said it fills in a lot of blanks as to why we ended up in a war in Vietnam. I think there is so much to understand about this time for Americans. As a country we have such guilt and confusion about Vietnam. I think the reader will come away with a much better understanding of this amazing country. They will also learn that military dependents, kids, found themselves in these places, something very few people realize.

Yes, I have just finished writing my next memoir. This one falls into the self-help genre in that it is about finding self after the world falls apart around you. The working title is ‘One Way Ticket: A Greek Saga’ and is about the journey that takes you out into the world and the one that brings you back.

Any good tips about life challenges ?

The most important thing I learned growing up in Vietnam was the perspective the Vietnamese have of life. It shaped me to know that one does not have any control over the events that occur in your life, that this is the ‘will of heaven’ at work. It is to be embraced and learned from.

Anything that you feel you need to express and reach out to the world about your experiences ?

Yes. Trust your instincts, yourself, and be open to change. Life is a great adventure!